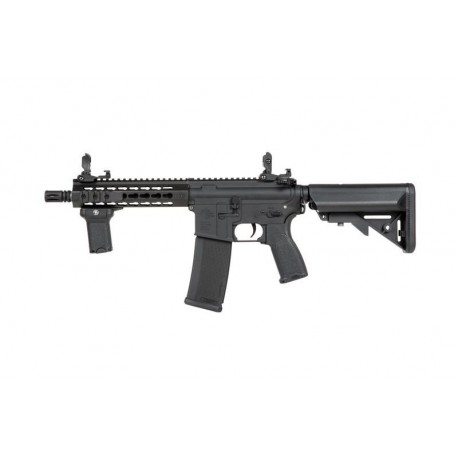 Notify me when available

The Specna Arms SA-E08 is another in the EDGE series of AEGs which not only feature rock-solid externals, but have a wealth of up-rated internal parts that redefine "out of the box performance", and are fully licensed by Rock River Arms. Externally the replica is majoritively made of Zinc Aluminium and Alloy, which not only looks and feels great, but is a tough material that can stand up to abuse. Polymers where used (pistol grip and stock) are a high density type which feel amazingly close to the real thing (in some cases better than the real thing) and ensure long-lasting performance and finish.

The front of the rifle features a 14mm CCW thread underneath the standard birdcage type flash hider, which is ready to accept suppressors, flash hiders, tracer units or anything you can throw at it. The rail system is an 8" KeyMod design with short 20mm RIS sections pre-installed out of the box. This gives you the option of both rail systems depending on whether or not you would like to keep the rifle as light as possible. The receiver is finished to Specna's usual eye-watering standard, and has laser engraved trademarks from Rock River Arms. The rear of the weapon features a six position sliding Crane Stock which is also where the battery is housed, and contains a small Deans connector. The rifle is included with an adaptor to Mini Tamiya so again, you have two connection options. Also at the rear is an ambidextrous sling plate which offers users the ability to connect a sling to either side of the weapon, making this ideal for both left and right handed players. There are QD sling sockets for a push-fit QD sling on the handguard and stock, to further your sling setup options. On top of the full length top 20mm rail are a set of flip-up ironsights which can be removed, or used in conjunction with a main sight. They are a flip-up style, and pressing the button on the rear will flip them up into place.

Internally, this replica features the ORION gearbox, which is a reinforced update of the Version 2 design we all know and love. Other internal components include: a reinforced Piston with full steel rack, Aluminium sealed Air Nozzle, Aluminium doubled-sealed Cylinder head, Aluminium double sealed Piston Head, Steel Gears, 8mm Bearings, 6.03mm precision inner barrel and a GATE X-ASR MOSFET, which will protect trigger components and promote longer life. The SA-E08 EDGE features the ESA™ quick change spring system, which makes changing your main spring a matter of seconds once the gearbox is removed. Fantastic for players who like to float between a standard AEG and DMR muzzle velocities.

Included in the box are two 125rnd Mid-Cap magazines, both made from Polymer and designed loosely around the P-Mag design, with tiny little Specna logos as a tessellating pattern in the background. Also included is a 20mm Foregrip, Deans to Mini Tamiya converter, User Manual, Sticker Set and ID Lanyard.

This rifle is ideal for those looking for an upgrade on their CYMA/Combat Machine AEGs, or those who need their external build qualities to be top notch. Considering the list of better-than-standard internal parts, this makes it great for those who just want their rifle to shoot great too. There's something for everyone with Specna Arms.

CONDITIONED SALE TO PEOPLE OVER 18 YEARS OLD, OR MINORS UNDER AUTHORIZATION (IN WRITING) OF THE PARENTAL POWER.

It is mandatory to present proof of membership in an APD (Sports Promotion Association), if you order one, please send proof and indicate the order number to the email: geral@hangar18.pt

It should be painted with a yellow or red fluorescent color (in the dimensions defined by law). The weapons are always painted according to the law in fluorescent yellow.

1 - Whoever, without being authorized, outside the legal conditions or contrary to the prescriptions of the competent authority, owns, transports, imports, stores, buys, acquires in any capacity or by any means or obtains by manufacture, transformation, import or export , use or bring with you a reproduction of a firearm, alarm weapon, salvo or alarm ammunition or weapons of the F and G classes, is punishable by a fine of € 400 to € 4000.